Conditions are not what they are last weekend but much better than they were last Tuesday. Some record rain south and east… well pretty much everywhere, threw a monkey wrench in the local rivers. On the West fork, the New Perez was spitting mud and had the midway point out of shape, but rebounded quick. It took about another day for the Upper Root to clear. But from Hannon down to Stevi is clear but still high. The upper Clark fork is still a no go. Rock Creek was downright dangerous for a few days with crazy debris coming down river. Still need to use extreme caution up there as things have changed. Blackfoot was fishing last Monday with some salmon flies and subsurface rigs. The rain muddied it up but has begun to fish again still mostly subsurface.
Rain today but not what we had last week shouldn’t mess us up. Were getting a cool June runoff is fairly steady. All this is going to give us an outstanding summer! Hatches right now are pretty much right on schedule. Big stones some little goldens and Drakes. On a sunny day some caddis also. On some of the stretches that are getting hit hard you may need to downsize or try some different patterns. Good drifts are starting to get refusals from the educated fish in some areas. Good luck and stay safe. 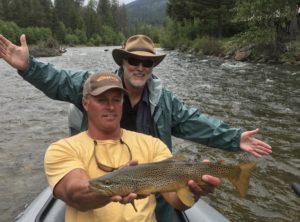