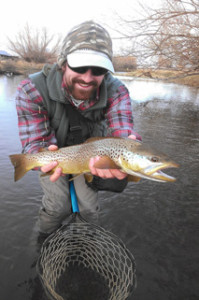 pring’s made it. Time for the big thaw. Things have started to fish pretty good, but conditions will vary from day to day. Were getting rain down low, and still getting some good snow up high. Continues to look like a great summer is in store. This runoff will give the rivers a good cleansing that will help from the bugs on up the ladder.
Right now the Bitteroot and the Blackfoot are the main game. The Clark Fork has doubled and running with a little color, which is pretty typical due to the type of land that borders it east of town. The bitterroot has also bumped but remains clear. The big bump up high was on the 10th and it has leveled off since then. Some nice fish are being caught. Its been a long winter and the fish are hungry and a bit naive. It’s been a while since they have had to worry about a hook in their meal. The trick this time of year is just concentrate on the slower feeding lanes and then concentrate on the same slower feeding lanes. Still cold water. They may jump on it or it may take a few passes to get some attention. As the air temps continue to rise the top water action will improve. Right now the best shot with dries is late afternoon. Nymphs that seem to be working the best are stonefly patterns and anything that may have the color of an egg. Pinkish, worms, fire beads…. Getting out of the boat and really covering a spot is often more productive than run and
gunning.