Hatch- the word alone gets most fly anglers excited. Add to the mix a long, cold winter and the mere thought of a big stonefly hatch with the prospect of tossing dry flies, and you get a whole lot of skwala commotion in western Montana. Let’s be real about this: water temperature is a big part of a stonefly hatch, and the skwala hatch is no different. Though reports are coming in of dry fly skwala eats here and there on floats down the Bitterroot, the majority of fish being caught are still succumbing to the nymph game. Streamers have been working, but the skwala hatch isn’t about tossing big meat through the bug biomass- its about dry fly eats in that skinny pre-runnoff water, and all the hooting and hollering that comes with it. 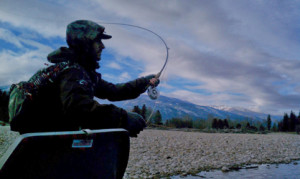 Skinny water, light cloud cover and skwalas on the water. Another day at the office.

Sure makes you miss that corner cubicle, eh?

While you wait for the water temperature to hit that magic number (which you can debate with the rest of the experts sidled up to the bar at Charlies), here are a few flies that get it done when the bugs are on the way, and then some. Make sure these flies are in your box when you head to the river this time of year, and you’ll be sure to find some willing takers. 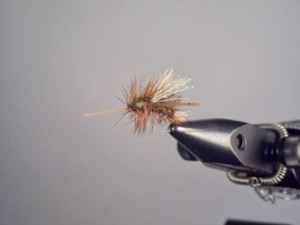 Stimulators get it done. The ubiquitous pattern is a day saver in some situations, and the early skwala hatch often has that boom or bust feel. A peacock body and brown hackle, with some olive rubber legs gives the stimulator a skwala overhaul that brings trout to net in the early hatch days.

The worm works always, so much so it seems silly to include it here. But paired with a big searching stonefly nymph that can get down quick, this brightly colored flash-heavy version makes the difference, and works to help find fish fast. It also stands out in off-colored water, a common accompaniment to the early hatch. 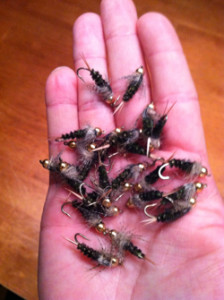 20-incher stones, size 6. Deep weight and skwala bugginess. Try them by the dozen.

The perfect pair with a small, flashy nymph or the dreaded worm, the 20-incher stone, rubber-legged or otherwise, is a top fly for the early skwala hatch. Bump this along the bottom in the skinny soft edges to locate where the fish are stacking up- that’s most likely where the skwala nymphs are staging as well. 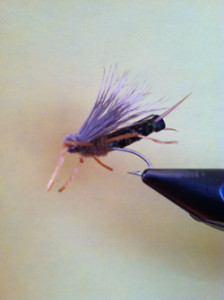 When the dry fly bite is on, or if you’re just sick of dropping the worm, anything with puke in the name is about what you feel like by the time this bigger fly comes out. Trina’s skwala puke is a great low floater, with enough appendages to mimic the slow struggle of the early bugs to make it to shore. Give it a shot early, late, and everywhere in between.