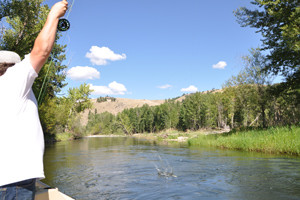 Last time, we touched base on the movement of the fly and how it is presented to the fish. One of the things I have to stress the most, is knowing that what you think the fly is doing, and what it is actually doing may be two different things.
Here’s an example: Take your streamer and drop it in still water and count how long it takes to sink a few feet. Now, look across the river and imagine the depth you think the fish are holding. If, in still water, it took 3 seconds to sink 2 feet, then throwing across a slow current you would almost have to double the amount of time it takes to get the fly to the desired depth due to the drag caused by the floating line and the current. In fact, it’s possible that the fly may never even get into the zone if you don’t make any adjustments. What I mean buy adjustments, is manipulating the line.
For instance, the first technique may be mending the line upstream. The second technique may be shooting some line upstream with a roll cast.
In extremely fast water, you may want to use what I call the see-saw technique. You would use this technique to maximize your flying being in the zone in fast water.
Here’s and example: I drop a fly in slow water and it takes 3 seconds to get where I want the fly to be across the bank. I’m going to figure it will take approximately 6 seconds to get down across the river even with a good mend or by shooting some line up above the fly.
So, I have to actually cast that fly far enough upstream with a mend to allow for those 6 seconds and the fly to sink into the zone.
Now, the fly is where we want it to be and we want to keep it there. Most people would want to keep mending to keep the fly down but this is a mistake. The reason being, that as you constantly mend, you are most likely going to miss when a fish hits. This is where I use the see-saw technique.
After you’ve got the fly where you want it, and are starting to move it across the current, you want to strip the line but not let go and reach for more line. Instead, hold the line in your fingers and follow it back as it slides back towards the first guide. Repeat this process until the fly stops directly downstream from you.
This technique cuts the speed of the fly moving across the river in half.